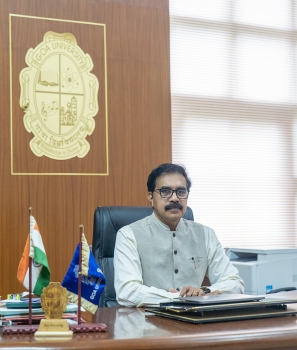 Professor Harilal Bhaskara Menon, Senior Professor and Dean, School of Earth Ocean and Atmospheric Sciences has taken over as the 9th Vice-Chancellor of Goa University on 3 Sep 2021. Professor Menon has 33 years of teaching and research experience at Goa University. His areas of specialization are optical remote sensing of coastal and estuarine waters and aerosol science.

His work was always with a concept of "LAB to LAND". In this regard, he initiated research on application of remote sensing to grass root level of humanity. First attempt was to retrieve surface chlorophyll-a, an index of productivity, of coastal and estuarine waters from remote sensing. These waters being highly optically complex, a need to develop an algorithm was realized. As a first step towards achieving this objective, he had developed a radiative transfer model (GURTRAM – Goa University Radiative Transfer Model, a first of it’s kind in India) and was presented at ISRO. Subsequently, ISRO had awarded R&D project under the prestigious National Project of IRS-P4-OCM with the task of chlorophyll-a generation from OCM Sensor.

Prof. Menon had initially developed a site specific algorithm and thereafter an algorithm to retrieve chlorophyll-a irrespective of turbidity levels of coastal waters of World Ocean. This was named as “Goa University Case II water algorithm (GU- CII), for which he received wide acclaim from International Scientific community and this became a base line data for any country developing future optical sensors for chlorophyll-a generation. Through this study he had shown that two optical bands 620 nm and 665 nm are inseparable components of any optical sensor for (i) precise synoptic retrieval of chlorophyll-a from turbid coastal waters to identify potential fishing zone, (ii) global carbon cycle studies and hence global climate, (iii) the degree of degradation of water quality in case II waters (regions where anthropogenic influence are directly affected) and to monitor the coastal and estuarine waters in the context of blue water economy (iii) monitoring coastal areas of hypoxia generating CO2.

This is the most important/significant contribution in the field of optical remote sensing, as none had ever developed such an algorithm and for the first time two bands, 620 nm and 665 nm have been delineated as integral parts of future sensors to generate chlorophyll-a from case II waters. This study earned Prof. Menon a position as a member of the peer group of National committee of ISRO to identify band characteristics for the forthcoming ocean colour sensor (OCM-3).

He further concentrated on deriving methods to apply optical remote sensing for Naval applications. To understand the effect of atmospheric particles (aerosols) on water cycle, made him to successfully develop an algorithm to generate aerosol over the coastal waters of eastern Arabian Sa from IRS-P4-OCM data. This also facilitated an understanding of land derived aerosol plume associated with north-east monsoon and its possible contribution to Trichodesmium bloom (a toxic algal bloom occur along the eastern Arabian Sea during April-May). Subsequently, many studies have been carried out to understand the interaction of insolation with aerosols (aerosol radiative forcing and atmospheric heating rate).His work on coastal water remote sensing and aerosol resulted in many scientific output on coastal water optics, aerosol and global climate, fields in which he has made fundamental scientific contributions.

To carry out all the above studies, Prof. Menon was successful in receiving R&D projects from various funding agencies viz; ISRO, MoES and NRB. The external cash flow (ECF) to Goa University was to the tune of Rs. 6 Crores. He had played a pivotal role in conceptualizing and implementing National projects such as ARFI, NOBLE and SATCORE.

In a University, research and teaching must go parallel. This made him to introduce courses on remote sensing and its applications, aerosol and climate and offered these courses across various disciplines of Goa University. Since hands-on-experiments is an inseparable component of a science course, a well-equipped state of the art Remote Sensing Laboratory and an Aerosol Observatory were also established with the external cash flow.

Prof. Menon, born on 31 Jul 1962, was awarded CSIR fellowship in the year 1984, received his M.Sc. from Cochin University of Science and Technology. He obtained his Ph.D. from Cochin University of Science and Technology in the domain of Physical Oceanography. He then went on to his postdoctoral work, under DAAD fellowship, at Max-Plank Institute of Meteorology and Institute of Oceanography, Germany. He had delivered numerous technical lectures for varied audiences.

He had travelled widely across different countries like Japan, Singapore, Australia, Taiwan, U.S.A., Germany and U.K. and organized various scientific sessions, chaired sessions on ocean colour and aerosol and climate in International conferences.