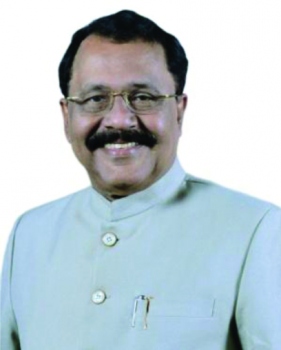 Shri P.S. Sreedharan Pillai was born in Venmony Panchayat of Alappuzha District, Kerala to V.G. Sukumaran Nair and Bhavani Amma. Shri Sreedharan Pillai is a successful lawyer, a former politician, an organizer par excellence, an orator, a prolific writer, a philanthropist and a thinker.

Shri Pillai graduated in Arts from Pandalam NSS College. He was an elected office-bearer of the College Union. Later, he pursued his Degree in Law from Calicut Law College and completed the course in the year 1978. During his stint at the Law College, Shri Pillai was the Editor of the College Magazine of his tenure, which marked protest against the Emergency and the Indira Gandhi Government, was much talked about at that time. He was elected as Law College Union Vice-Chairman besides elected Senate Member of Calicut University.,

A bilingual author, Shri Pillai writes both in English and his mother-tongue Malayalam with ease and dexterity on topics close to his heart such as politics, social and legal issues and poetry. So far he has written more than 130 books including 15 poetry collections in Malayalam and English.